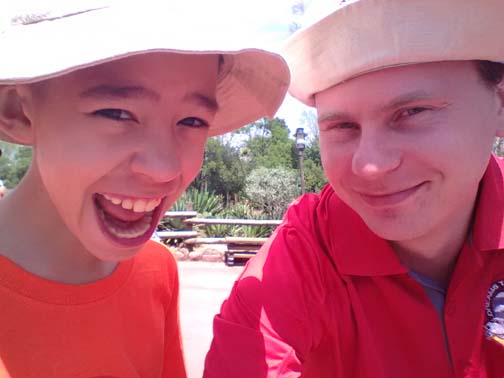 Last Wednesday while most of you were still sleeping – actually, you night owls were probably just going to bed – I was at the Winnipeg airport gearing up for another once-in-a-lifetime trip with a bunch of kids for Air Canada’s Dreams Take Flight journey to Florida.

Air Canada loads up a plane with kids in the middle of the night (with their parents’ permission, of course!) and departs for Disney World. The group arrives in Orlando and is whisked to Disney World for a daylong adventure – yes, one day. It happens all in one day. We board the plane early in the evening and arrive back in Winnipeg just after midnight the next day.

The flight to Orlando has ice cream and even a pillow fight with pillows thrown through the cabin. The way home sees a much quieter flight because everyone is exhausted and sleeping.

Even though I was there as part of the media entourage I couldn’t help but be a kid for a day. There is something magical about seeing the excitement on the kids’ faces as they meet their favourite Disney characters and go on the amusement rides they’ve always heard about and seen on TV. Did it make me believe in magic? Yeah, maybe it kind of did.

As we get older we still laugh and have fun but not the way kids do. Yes, we have more responsibilities and there is a lot more to be concerned with in life, but an opportunity like this makes you stop for a minute and think, “Why do I take things as seriously I do?”

Don’t get me wrong, I’m not saying to go through life a silly goofball. I am saying to take a step back before you get worked up about something when it really isn’t a crisis. Some of the kids on the Dreams Take Flight trip have gone through or are going through things and battling conditions many of us adults couldn’t fully understand or relate to.

The beauty of Dreams Take Flight is that for one day, none of that stuff matters. A kid is a kid is a kid. Sick, healthy, underprivileged, abused, hyperactive – Air Canada creates a special day full of lifelong memories that the kids cherish for years to come.

The sights and sounds of Winnipeg’s Dreams Take Flight journey were captured for a special radio broadcast. The web content is online at dreams.jbonair.com.

I’m not giving into coronavirus hysteria