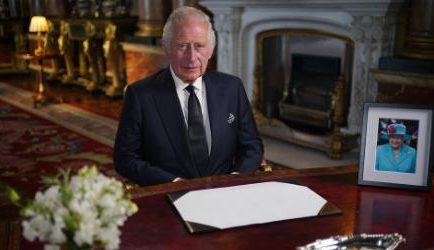 It’s one of those questions that will be asked for years to come: Where were you when the Queen died?

In the news business, we were watching wire reports and wondering how things would play out after the cryptic message about Queen Elizabeth being in doctor’s care.

I turned on the TV and knew things were serious when CBC’s Adrienne Arsenault took over the anchor desk wearing a black jacket (something that the British and Canadian public broadcasters were instructed to wear in the announcement of the Queen’s death — really).

As an entertainment reporter, I’m tasked with handling the fluff news of major stories. Meaning, how are celebrities reacting? In this case, we knew famous Brits would respond emotionally, while Americans would comment on the Queen’s work over 70 years.

Once the who, what, when, where, why, how had been answered (as best they could in the moment, anyway) that’s when my radio airtime started.

It’s the usual hard-hitting questions I answer for audiences: How did Ozzy Osbourne react? What did Elton John say? Is Paul McCartney OK? And then the usual: Has Kim Kardashian tweeted? Paris Hilton said what?

Had it not been for the pandemic and politicians acting like kings and queens, commanding their subjects to obey or face punishment, I might have a different feeling about the overall concept of a monarch. I realize Queen Elizabeth II wasn’t dictating and ordering people around, however, it’s the mere definition of what a king or queen is and does that rubs me the wrong way.

We no longer have a tolerance for people telling us what to do — especially after so many politicians didn’t follow their own rules during the lockdowns.

Last weekend, when the focus shifted to King Charles III, I was again turned off by the pomp and circumstance. It’s the silly hats and costumes that seems so out of date and out of touch with the world.

Having interviewed hundreds of celebrities, my approach from the beginning has been to talk to people like they’re a regular person. I’ve never bowed down and kissed a celeb’s ass and told them how much I love them. Even calling Donald Trump “Mr. Trump” on the red carpet of The Celebrity Apprentice made me want to gag. I did it, however, to play the part because that’s what was expected at the time.

Most Canadians are largely unaffected by the royal family because, well, they don’t do anything for us. This isn’t about somebody new being in power, it’s the irrelevance that is the role of king or queen to this country.

The talk is about how life will be different with a king. Perhaps the question is: Is it different? Really?