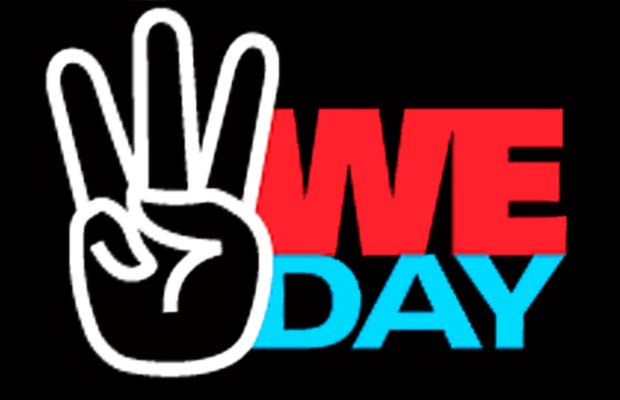 There’s this phenomenon sweeping the country and it’s called We Day. Have you heard of it? It’s a giant pep rally for Canadian teens to do good in the world. Whether that’s volunteering, fundraising or somehow making a difference in the community or overseas, the kids are encouraged to get involved.

I’ll admit, I had never felt older than when I attended last year in Winnipeg. It was the first time We Day had rolled through the city and I got a good understanding of the noise level of a Justin Bieber concert.

Yes, I am an entertainment reporter but my audience and focus is on American celebs. So to have all these Canadian unknowns parading around the stage and getting the 18,000 kids to scream, I’ll admit I was a tiny bit out of my element. I hadn’t heard of most of the Canadian music artists that performed.

We had arranged for a local student to attend the event with me and act as a photographer. The 16-year-old’s school was invited to the show and he got bragging rights because he could join me backstage in the media room with all the other reporters and the best part, according to him: enjoy the free refreshments.

At the time I thought most of the students would look at the rally as a day off school. They got to take part in concert-type show and took home a bunch of swag. What kid wouldn’t love that? But the long-reaching impact it had surprised me. I didn’t give the kids enough credit.

The student assistant – now 17 years old – keeps in touch and said he has started different initiatives in his community and is involved in student council, which he never had an interest in before.

Granted, he’s not changing the world, but at least he is taking strides at improving the world around him. Do I give We Day all the credit? Most of it. I think it shows a level of maturity in any person – teenager or not – when they want to do something nice “just because” and not expect anything in return.

And for the record: I was invited back to We Day this year but I had to consult my ears and they said no way.

The hypocritical world of Justin Bieber