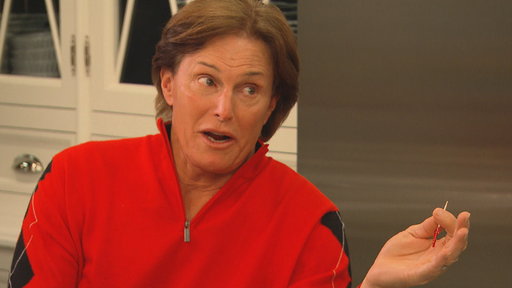 As an entertainment reporter on radio I can tell you that there was no other story dominating my daily segment like the Bruce, er, Caitlyn Jenner Vanity Fair cover.

In cast you’re not, well, keeping Up with the Kardashians (get it? That’s a TV show), you might have missed that former Olympian and step-dad to the K Klan is becoming a woman.

Over 17 million people watched his sit-down interview with Diane Sawyer earlier this spring. And the public waited to get its first glimpse at the new Bruce. At the time, we did not know what he had chosen for his name.

So with a splash of sexuality, Bruce revealed his new identity on the cover of a magazine. It instantly took over social media and he even set Twitter records. It garnered praise from all over, including President Obama who chimed in.

But the media has had some trouble with what to call him/her. And I use the slash in there because some outlets are still referring to Caitlyn as a him and some have used the term “she” when describing the transitioning Jenner.

In all honesty, as much tolerance and understanding Jenner has been given from the public it seems like the whole “sex change” thing is still confusing people. I’ll be honest, I don’t even really understand how to present the story when I am reporting the details.

Here’s a serious question: Do I say that Caitlyn is Kim Kardashian’s step-dad? Former step-dad? Step-mom? Honestly, I’m not making a joke. What’s the correct way to say it?

I also know that had I not prefaced my questions with a disclaimer that it is a “serious question” or saying “I’ll be honest” that people would have taken offence and jumped on me suggesting I was making a joke and mocking Jenner. Truth is it is a legitimate question people have.

I understand that this sort of thing is new for many people. I think we all have a lot of questions about it and it will just take some time to understand. It wasn’t that long ago people said, “Wait a second: you’re a guy who is sexually attracted to guys? I don’t get it.” (Some people still say it.) So I think this too will come with time.

Nevertheless, whether or not Jenner went so public with this story for publicity or to actually raise awareness, it was/is a brave thing and at least it’s opened up discussions about tolerance and acceptance of others. Can I say, “At least he had the balls to do it?” OK, let me have one joke this week.

Swimming with the sharks