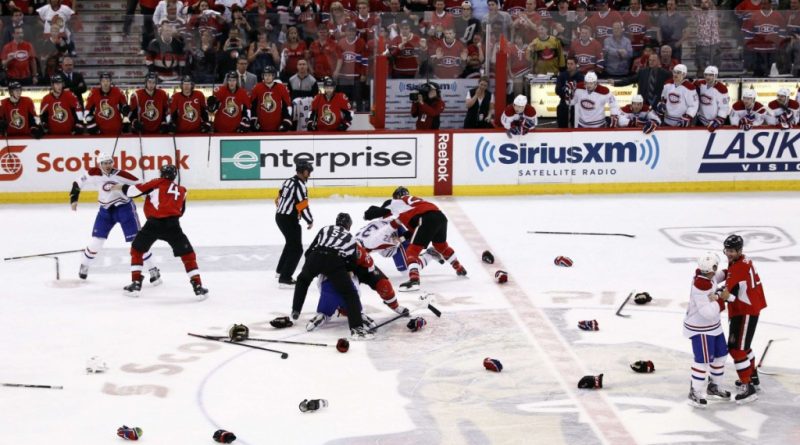 There are drunken goons at Canadian sporting events, too? Say it ain’t so.

Onlookers clutched their pearls at a recent Winnipeg Jets game when a bloody fight broke out. And I’m using bloody in the literal sense — a guy’s head was bleeding.

Spectators where aghast at the sight of people in the stands getting violent while watching people on the ice, well, get violent. (Irony, right?) Leave it to the professionals? But, their profession is skating and shooting pucks, not busting open someone’s face. I’ve never understood why fighting is allowed in hockey.

Last month, in Prince Edward Island, a brawl broke out at a hockey tournament that had police called amid several fights on the ice, and spectators themselves eventually getting in on the fun after a game.

Again: Shocked, I tell you. Shocked.

It’s largely been considered an American “thing” — mostly at football games, sometimes at baseball games — where someone, or a group of people, have too much to drink or take the heckling too far and all hell breaks loose.

As I’ve noted here before, TMZ traditionally posts bystander videos of said melees on Mondays after everybody sobers up from Sunday Night Football rowdiness. It’s practically celebrated because, let’s be honest, the gossip website certainly isn’t condemning the behaviour by posting it week after week after week.

I remember going to one of the first Jets games when the team returned to the city. Within minutes of the first puck drop, so did the gloves and two goons were duking it out, to the cheers, screams and delight of the audience. Then, when it was broken up, a replay — sponsored by Manitoba Hydro, I should add — led to the crowd reliving the action and hooting once again.

In that moment I thought, “Is Hydro specifically sponsoring fight replays or was it just their turn on the scoreboard?” Either way, the violence is accepted, condoned and, evidently, marketed in the NHL.

Years ago, when my nephews were starting in hockey (they were maybe five or six years old), my mom asked one of the boys what he wanted for Christmas. He said – his exact words — “Hockey gloves so I can throw them down and fight.” Truly. While the rest of the family laughed, I filed that away and kept my mouth shut.

Deep down, we know that punching someone in the face is wrong. But given today’s unhinged society, and the monkey-see-monkey-do attitude of a violent population (not to mention an intoxicated one) how can we say that fist-to-fist combat is OK in one instance and wrong in another? Both are willing participants, no? What’s the line? Because one’s a job and the other’s recreation? It’s OK if you’re being paid?

Years later, when my nephews, now teenagers, play hockey, there are times when it gets too aggressive on the ice and spectators, often parents, comment about it going too far.

But, but, but… the millionaires do it and everyone loves it.

But, but, but… maybe it’s time to change that so nobody — especially impressionable minds… or drunken fools — gets confused about when it’s OK to beat the snot out of someone and when it’s not.

Was it a royal waste?