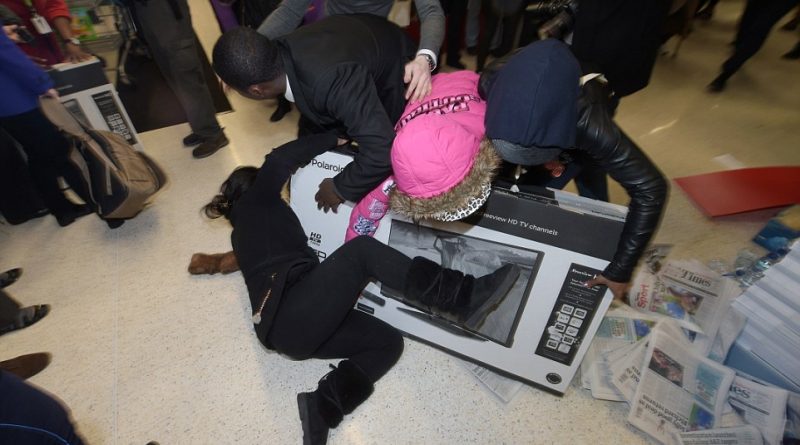 As we approach one of the most dangerous days of the year – if you factor in election day in the U.S. – Black Friday is known just as much for its door-crasher deals as it is the violence and desperation to get those bargains.

While I flipped through the flyers this year I couldn’t help but wonder (and maybe laugh a little) at the spectacle that Black Friday has become – primarily in the U.S., not so much in Canada.

There are line-ups outside before stores open, no different than Boxing Day in the Great White North. But there is a sense of civility and decorum in our country. No matter how much I might save and how badly I want that TV, I could never envision myself packing a Taser or preparing to duke it out for the purchase. Maybe that’s just me though.

Though I am wondering if people now just look for the challenge. Perhaps they don’t even really want the item they are rolling on the floor to grab from someone. It could just be bragging rights to say they were strong enough to pull the item away from a fellow shopper.

It could very well be the thrill of the competition. Maybe it’s also a little for show because people know their ridiculousness will be recorded by onlookers and almost immediately posted to Facebook or YouTube channels.

In a world of online shopping, it’s safer, convenient and much warmer to just order stuff and have it shipped to you. The reality is there are still some people who need to get their hands on an item and do a very public touchdown dance when they score a good deal.

Like I said shortly after the U.S. election: I do like to be right, but when it comes to the embarrassment of some parts of society, I do sort of wish I am wrong. But, Black Friday violence is almost as sure as turkey at Thanksgiving.

In closing, all I have to say about Black Friday is: wait for it, wait for it.

It’s not about what I can afford, it’s who I feel is taking advantage of my money

Fake feelings can help others