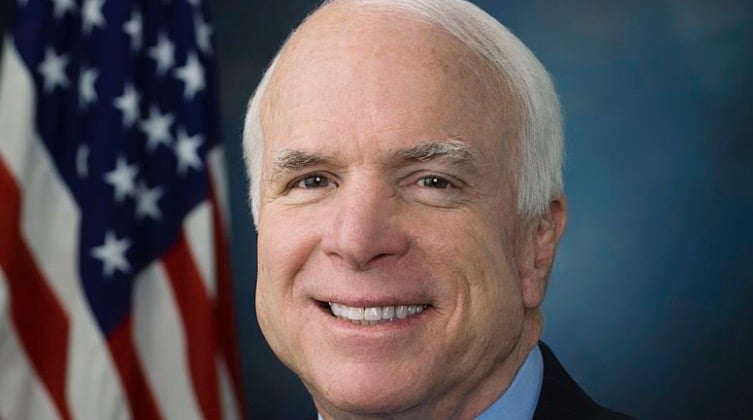 We’ve heard a lot about the First Amendment from our American neighbours in recent months. Whether it is protesters expressing their opinions or someone defending their right to use hate speech, Americans have been having Amendment debates loudly, aggressively and sometimes violently.

So, when a new White House scandal broke that an aide to President Trump made a disrespectful comment about Senator John McCain who’s battling brain cancer, it’s confusing why people would want Kelly Sadler to be fired. Doesn’t she benefit from the First Amendment no matter how dark the comment?

It happened earlier this week when Sadler reportedly was part of a conversation about Trump’s nominee for a position at the C.I.A. McCain is said to be opposed to the nomination and that’s when Sadler (allegedly) said, “It doesn’t matter. He’s dying, anyway.”

Let me be clear: I’m not defending the supposed comment. If it was a joke, it certainly was distasteful. But in a divided country where most people agree that there is a right to say what you want, it seems questionable that someone should lose their job just for a remark that was disrespectful.

When White House reps talked to the press they refused to comment if Sadler would be fired or if the Trump administration condones such dialogue if Sadler won’t face disciplinary action. At the same time, I understand the White House press folks not commenting on a remark that might have been made in a private internal meeting. Should they really be talking publicly about human resources issues?

But it seems in today’s off-with-their-heads-style politics, the mob is ready to jump on anything. When this story broke, CNN had hour after hour of panel discussions fuelling the fire and ramping up the controversy. The TV debates won’t change anything so why bother going around and around talking to more and more people about it?

At the end of the day, Sadler isn’t a public figure. Sadler isn’t a public-facing representative of the White House. Was it rude and hurtful to McCain and his family? Sure. It’s a slippery slope though when a joke in a private meeting leaked to the public can get a person fired.

Send her home for the day. Suspend her. But firing someone for making a joke? There was no bullying or harassment of an employee. There was not threat to anybody. She made a stupid comment.

This reminds me of Billy Bush getting the axe for “grab ‘em by the pussy” and that poor SNL writer who was fired for making a joke. I understand a company not wanting to be associated with controversial comments made in a public forum. But Sadler’s comment was made in a room with about 20 people, according to reports.

Let’s be honest, if a person can get fired for making an off-colour comment in a meeting, I should have been fired hundreds of times over by now.