It’s a slippery slope these days. Jokes can’t be jokes. Quickly we are learning the joke teller’s intent doesn’t matter, it’s the audience’s reaction that determines if the mob will come after you.

Last week I commented about the personal experience I have had on social media in recent weeks thanks to tweets about current events — namely President Trump and various protests.

So for a country that has no problem electing a guy who talks abut aggressively sexually assaulting women, mocking the disabled and calling people names it is concerning that a writer for Saturday Night Live could be suspended (read that as “fired”) for making a joke about Trump’s young son, Barron.

Katie Rich was turfed by the show that endlessly mocks Trump, Trump’s wife and Trump’s grown kids for one simple sentence during the inauguration a couple of weeks ago.

“Barron will be this country’s first homeschool shooter,” read the tweet that quickly got Rich attacked and subsequently fired. Dad Donald condemned the post calling the writer and SNL “a disgrace.”

But it brings to question the picking and choosing of a person’s offence. Their country seems so anti-Trump why would they jump on someone making a Trump joke? Seems like a 10-year-old should be off limits.

People have no problem screaming out death threats in all-caps to strangers online but as soon as you mess with an innocent kid there’s trouble. It’s bizarre.

For a woman whose job it is to joke, mock and skewer I don’t blame Rich for being caught off guard. Until this she was largely unknown. It is odd that the show can say anything about anyone and take heat for it yet a personal joke on a personal social media account was put under the microscope.

While we don’t know the exact details in the HR office (fact: people were calling for an SNL boycott and Rich’s firing) it could be that public pressure and not offence taken by the higher ups caused the end of Rich’s employment.

It should be concerning we live in a world where people get away with a lot more than a tasteless joke about someone’s kid. 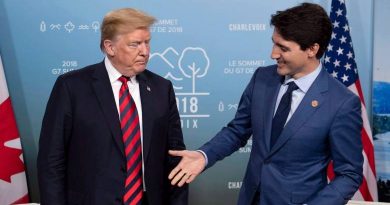