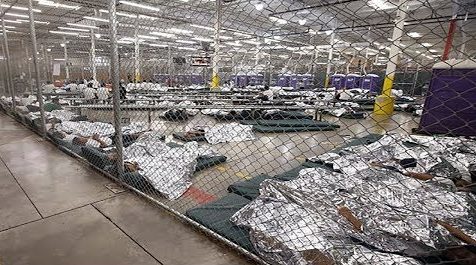 If ever you have locked your dog in a kennel and felt guilt, you can never work for the Trump administration.

In recent weeks we have heard that there is now a “zero tolerance” immigration policy and those adults trying to get into the United States across the southern border will be charged with a federal crime. A bonus to that punishment: their kids are taken away… and locked in a cage… and sleep on a mat on the floor.

The Trump administration changed the policy in April, though it argues the law has been around for quite some time, they’re simply enforcing it now. But that has led to — get this — the Republicans and Democrats pointing fingers at each other and arguing.

The initial anger was that children are being taken away from their parents. It was fuelled when details started to emerge about what the kids are going through.

They are being treated like prisoners and, judging by pictures released by the Department of Health and Human Services, the environment in an emptied-out Walmart store very much resembles a dog kennel.

The government defends this saying the kids are entertained with TV and spend an hour or two outside the warehouse building every day… but clearly the images show they are locked in chain-link areas while inside. Some are covered in foil-looking blankets on the floor. (I’m still waiting for the president to show up for a photo opp and start throwing rolls of aluminum foil at them.)

Here’s where I flip the coin and give another opinion.

It’s true that sneaking into the country is illegal. When you break the law you should face the consequences. If that means as an adult you are thrown in jail and your kid is taken away, well, that’s the reality of what happens to law-abiding citizens. Generally you trust that your offspring will be taken care of by a relative or a government agency. In this case, the kids are being handed over, they just aren’t facing the same treatment as American kids in “the system.”

I also understand that many people are visiting the border in an attempt to gain entry legally. I get it. I’m not talking about those people who are following the process. (Though there are disputed reports that people are being detained at a port of entry when they are seemingly following the rules.)

It could be argued that any parent willing to break the law and put their kids in danger by illegally sneaking into a country should be punished and deemed an unfit parent. It’s also true that some people feel so desperate and fear for their safety that they will go to any length to make a new life for their family.

I’m torn on the issue of how these people should be dealt with. (Don’t get me wrong, I am not for a second condoning keeping kids in a cage.)

What I do know is that the kids haven’t done anything wrong except to trust in their parents to make their life better. And I can only imagine what the kids think of the U.S. now. In fact, most of them probably say, “Let me go back to my shithole country if this is how I’ll be treated here.”

Welcome to the United States, kids. The land of the free and the home of the, well, you can fill in the blank.

SIDE NOTE: Did anybody else notice Department of Homeland Security Secretary Kirstjen Nielsen giving the finger before she took the podium in the White House Press Briefing Room on June 18? 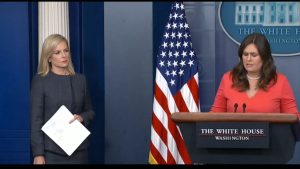 So… the midterm results were… good… or…?