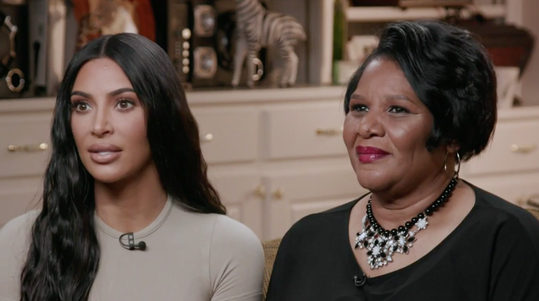 She had a relatively small audience when she made her on-camera debut, but Kim Kardashian has grown since that infamous sex tape. She’s become quite a humanitarian in light of being instrumental for the release of Alice Marie Johnson.

While Keeping Up with the Kardashians has featured scenes of the K sisters being charitable, I can’t help but be reminded that much of the show is scripted. I never give them credit for what they do in front of the cameras on a reality show.

Over the years I have written some scathing comments about the Kardashians. You can read them HERE, HERE and HERE. But even I am wondering if Kim is growing up right before our cynical and dismissive eyes.

Remember, this is the person who wanted to be taken seriously after she had a sex tape, signed countless TV deals to exploit her life and even backtracked when she first had a baby saying that the child wouldn’t be shown on those reality shows. Now, the kids are celebrities as she and hubby Kanye West cash in on their brood week after week when KUWTK is on.

But we have seen a change in Kardashian since the Paris robbery where she feared for her life. Again, the cynics thought it was staged and a big PR scam. (I remember getting ready for bed that Sunday night when the story broke and rolling my eyes, thinking I wouldn’t have to re-tape our pre-recorded entertainment headline show for Monday morning.)

After she stepped away from the spotlight for a few months, Kardashian said she took some time to reflect on her life. She thought about what mattered and how living a life based on expensive, materialistic things wasn’t fulfilling anymore.

It was about seven months ago she said she started following the story of Johnson’s drug-related arrest and subsequent life sentence. Kardashian said she was bothered that a non-violent offender would be locked up forever without the chance of parole. That’s when Kardashian stepped into action.

The rest is history: she had calls with Ivanka Trump, met with the president and then Johnson was set free after much discussion.

Kardashian is being called a hero. She’s also facing criticism that she’s using her star power to help criminals and will now experience a long line of people requesting her assistance.

Whatever the reason — whether it be for the praise or that she really has re-evaluated things — Kardashian used her influence for something good. If she maintains that and doesn’t turn it into a business is another story. You know how the Kardashian publicity machine works.

For now, I applaud but do not praise.

People need to lighten up!