I had my first corona drama with two women at a store.

We’ve all seen on the news or social media, the confrontations over wearing face masks, properly wearing face masks, and social distancing. Oftentimes, it’s aggressive and loud. Sometimes it gets violent. Every time, it goes viral. TMZ loves posting videos of people losing it on others during the pandemic.

I was in line with several people ahead of me and behind me. Most businesses have removed those footprint stickers on the floor showing where to stand so people guess they’re about six feet from others. Or do they?

Two older women were talking behind me and I sensed they were close based on how well I could hear them. Meaning, they weren’t shouting but their near whisper was fairly close. I turned to the side and looked out of the corner of my eye. They were less than two feet from me.

I didn’t say anything but I casually inched forward thinking that would bring me some comfort. It did — until one of them started coughing. She coughed a couple of times and I finally turned around, looking at the floor, and said, “Six feet please,” motioning with my hand to back up.

I turned around and hoped my request would be honoured. They shuffled back a little and started complaining to each other just loud enough for me to hear. Oh yeah, this time they were speaking in English. Their previous conversation was in Portuguese.

“I don’t think he’s six feet from that guy,” one said, referring to the man in front of me. “No, that’s much closer,” agreed the other. Thinking they wanted a confrontation, I ignored the opportunity, though I was tempted to say, “Yeah, I’m moving up ’cause you’re riding my ass.”

It was my turn at the counter and I carried out the transaction. They were up next at the cashier beside me. When it was time to pay, one of the said to the employee, “Can you move that (debit) machine closer? I don’t want him to yell at me again for being too close.”

See how it was spun? I was the bad guy. I was the one in the wrong. And yell? Lady, please. I calmly and quietly said three words and turned around. Nobody else in the line heard me or knew I said anything.

It’s interesting how these two people, who weren’t following a provincial health order, turned it around because I called them out for doing something wrong. And rather than apologize or recognize their actions, they were offended that I had the nerve to point out their recklessness.

I’m not one of those paranoid people. But I, like many others, are getting sick of people ignoring the rules AND complaining that the pandemic is never-ending.

Do something about it if you’re tired of the day-to-day restrictions. Don’t cough on my neck and bitch when I tell you to respect my space. You can’t have it both ways. 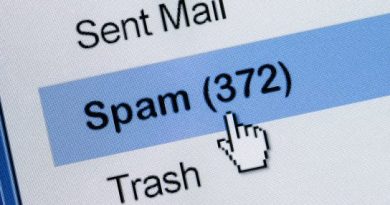 Hey, Marketers: 1 email doesn’t mean I want a relationship with you