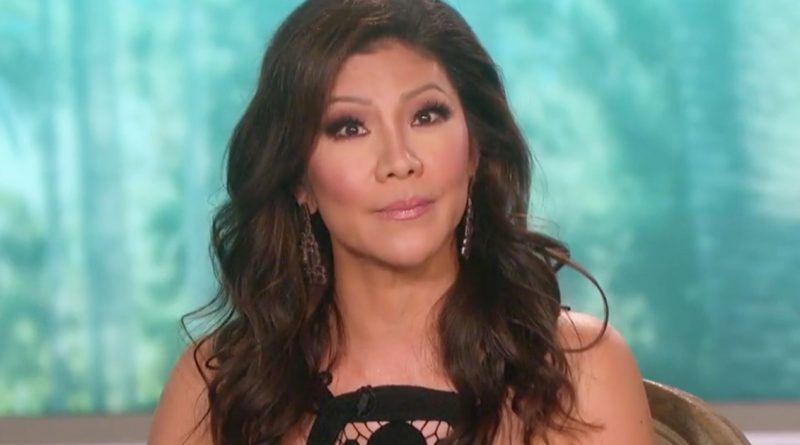 So much for being a powerful voice for women. Julie Chen has buckled under the pressure.

As the now-former moderator on CBS’s daytime show, The Talk, Chen frequently spoke of female empowerment and how there needs to be a sisterhood when it comes to rallying behind and supporting each other. That is, of course, unless your husband is accused of being a molester and rapist. Ironic that with a show whose hashtag is #EverybodyTalks, Chen hasn’t, well, talked about it.

Ever since Chen’s husband, former CBS CEO Leslie Moonves, faced accusations of being a dirty old man, she’s shied away from standing behind her gender. In fact, viewers anxiously awaited her statement earlier this year to see if she would choose her gender or her man. She picked the latter. (For the record, Moonves has denied the allegations against him, suggesting people are trying to destroy his character decades after he worked with them.)

In a statement tweeted and later read on The Talk, Chen said, “I issued the one and only statement I will ever make on this topic on Twitter, and I will stand by that statement today, tomorrow, forever. I have known my husband, Leslie Moonves, since the late ‘90s, and I have been married to him for almost 14 years. Leslie is a good man and a loving father, devoted husband and inspiring corporate leader. He has always been a kind, decent and moral human being. I fully support my husband.”

Chen’s good and loving man was previously married to Nancy Wieselfeld when they got together. It was two weeks after the divorce was finalized that Moonves and Chen wed.

Because Chen has largely been silent on the Moonves scandal since it broke several months ago, we can only make assumptions about why she’s no longer talking. When The Talk returned for its ninth season last week, Chen was absent. She’s never returned.

Funny that Chen avoided daytime TV but chose to preside over her other CBS show, Big Brother, last Thursday night. Some speculated that it was because she’s robotic on that heavily scripted show and wouldn’t have to endure conversation about her relationship. (Though she seemingly went for a viral moment by signing off as Julie Chen Moonves — all the while misnaming the BB houseguest she was sitting beside. She called Brett “Brent.” Maybe she was too focused on mic-drop moment.)

Nevertheless, it can be viewed as incredibly cowardly for Chen not to speak up and defend her husband by sitting with other women and having a discussion. The only thing she had to say was a pre-written statement and didn’t take any questions. How is that fair? It’s one thing to be in control of a conversation but if you stand so proudly with your man, why not answer questions? Everyone should be expected to defend their position if they “fully support” something.

As a broadcaster who’s done hard news and discussed heavy subjects on The Talk, Chen is no stranger to asking the tough questions. It stands to reason that if you can put someone else in the hot seat, you should stand up for what you believe in. There’s no need to go into hiding now. This scandal broke months ago. Whether it’s one woman, two women, 10 women or 20 women, if you stand behind your man and are powerful in that statement, why can’t you answer the tough questions about his alleged actions and your relationship?

One can only imagine the embarrassment and pain Chen might be going through. I get that. It makes sense. She should be embarrassed. At the same time, you can’t talk out both sides of your mouth on an issue. Chen was blasted for not even commenting on the alleged victims in the Moonves drama — a number that totals at least a dozen women.

Chen’s excuse for not returning to The Talk last week was, “I am taking a few days off from The Talk to be with my family,” though we now know she is never returning. Well, she is, in a sense. Word broke during the Emmys on Monday night that Chen will address her exit on Tuesday’s The Talk — again, in a prepared statement. Just as spineless, it’s a pre-taped video, meaning she isn’t even showing her face on-set to talk about it. (Maybe she’s off to see The Wizard for courage… and a heart.)

There is talk that Chen fears her career is over since she no longer has much power at CBS with her husband booted out the door. We’re hearing rumblings Chen acted high and mighty around other employees — employees who are speaking out because Moonves is done and Chen is just one of the common folk on staff now.

I’m not sure that Chen’s career is done simply because of her husband’s scandal. I see her having a tough time being taken seriously as a strong woman considering she did nothing to speak up for her gender when the going got tough.

Yes, you can support your husband and also say that you feel sorry for women who have suffer abuse. The tricky thing is how you can publicly address and defend both during such an overly sensitive time in the world. Maybe you can’t. Maybe you need to bear the humiliation of backing your husband while people call you a hypocrite.

I sense Chen laying low for a while and then doing some kind of sit-down interview with Oprah or Barbara Walters — perhaps even with Moonves by her side (if they’re still together then) — and having a civil dialogue about what happened. It might be in a year once the dust settles, provided more women don’t come forward to fuel the fire.

I don’t believe that Chen will be the type of woman to have her man financially support her for the rest of her life. Moonves is reportedly worth hundreds of millions of dollars. Then again, Chen did show how spineless she is when it came to defending women who’ve (allegedly) been abused by her creepy husband so is being an unemployed trophy wife really beneath her at this point?

And what if he called her a ‘black girl’?

Is Hollywood full of itself? Well, duh!