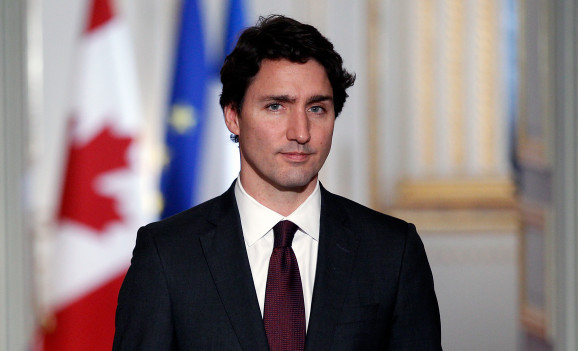 Prime Minister Selfie — uh, Trudeau — had his first official meeting with other world leaders this month. By all accounts he got a “rockstar welcome” — and that’s how it was described in the headlines.

But days before he was in Turkey, Trudeau addressed the nation following the devastating terrorist attacks in France. So how did he do on his first official speech as our leader?

He seemed scared. Trudeau seemed absolutely terrified. I realize he was thrown in front of reporters after dozens of people were killed in Paris but I expected a leader to sound compassionate yet confident.

I understand if he didn’t want to launch into an aggressive, “We’ll get these a-holes” rant but him stuttering and “um”ing his way through his brief few minutes in the international spotlight was disappointing to me. Actually, I just saw him on the news aboard his airplane heading to another conference and he “uh”ed his way talking to reporters about just basic stuff.

Being a rookie maybe he hasn’t had time to brush up on his public speaking and media persona, but at the same time he sounded quite polished and confident in telling us why we should vote for him (well, his party) during the marathon election campaign.

When Trudeau finally was allowed to be the smiling college kid, as people have noted after his summit appearances, taking selfies and being viewed as a movie star, he probably represented the country just fine. It doesn’t sound like he stepped on anyone’s toes — aside from that refusing to bomb the terrorists thing.

So Canada is looked at as having a youthful leader who is one of the people. Does that have us taken anymore seriously? Maybe, since it doesn’t look like we are being ruled with an iron fist. Does it help in times of crisis? On the surface, perhaps not right now but time will tell. As some people have told me, “It’s better than still having Harper.” Again, time will tell.