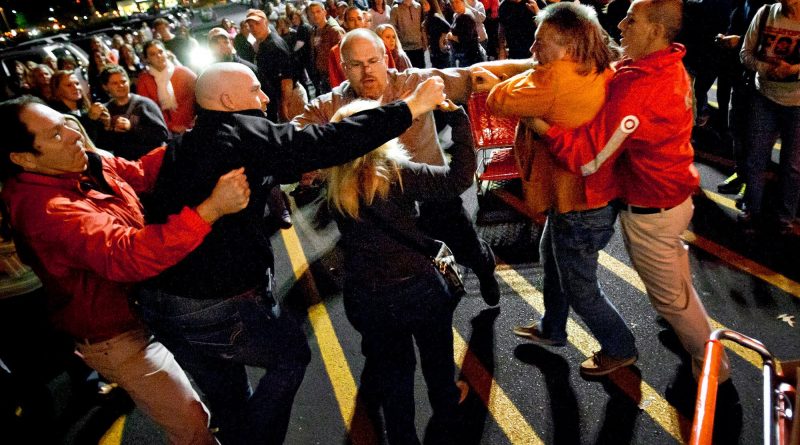 Today I tweeted the question: How many Black Friday-related deaths will there be today? Part joke, part serious. But today we see a different side of humanity. (The first phrase that came to mind was “the worst in humanity” but in the grand scheme of things retail violence isn’t above terrorism.)

If you have watched the videos on YouTube you will have undoubtedly seen Walmart is the place to get your fisticuffs on — at least in the U.S., anyway. It is all for the sake of cheap-quality electronics at door-crashing — and evidently bone-crushing — prices.

The evolution of Black Friday is comical to me. At first it was a day of shopping after Thanksgiving. Then it became an event for which you camped out to be the first in line. Now people are ditching the family Thanksgiving dinner to prepare for battle in a store.

What a great lead up to the holiday season, hey? Wrestling with strangers to save a couple bucks is more appealing than a quiet night with the ones you love. Granted, not everyone has a friendly family dynamic so perhaps the shopper-on-shopper violence is better than a family fist fight. Makes you wonder the kind of homes these people were brought up in, doesn’t it?

At the same time, I don’t think I would be flattered to get a Christmas gift and know that the victim, er, other shopper lost the brawl and is clinging to life in hospital. Nothing says “it’s the thought that counts” like…

I am not sure if the craziness happens for Canada’s Black Friday but I never underestimate the determined bargain hunter. For the savvy shopper, they simply head to the Internet and shop online where it is not a contact sport aside from fingers hitting a keyboard.

It’s too late to wish you the best of luck for Black Friday so I hope I am at least entertaining you… while you recover in hospital… for that TV you weren’t quick enough to grab… and now have to find something else for your kid for Christmas. Ask for an eggnog drip if you’re confined to a hospital bed for a while.

Give me what I want

Do we really mean it?