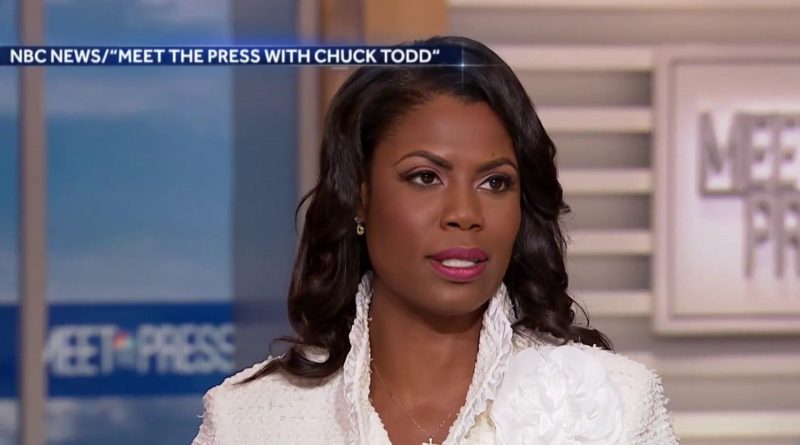 Omarosa Manigault Newman, former reality TV star and year-long White House employee, was fired from her job earlier this year but did her best to cloud the actual reason when she did the media blitz following her exit. (Was she fired or did she choose to leave? She claimed the exit was a predetermined date.)

With her new book, Unhinged, due out shortly, it makes sense that she is once again making her rounds and commenting about her time working for Donald Trump (again).

You’ll recall the two had great admiration for one another when she was a contestant on The Apprentice. From there, Newman became a devoted Trump supporter, quickly taking a job at the White House when her former boss became president.

But in an administration known for lies, deception and twisting facts, Newman claims she was just covering her own butt by recording conversations she had with people — including Chief of Staff John Kelly firing her and President Trump saying he knew nothing about Newman’s firing prior to it happening.

Newman is drawing criticism for recording conversations that should be private, especially in the White House Situation Room where electronic devices are prohibited. There has been a lot of talk in media circles if Newman’s actions broke the law. (I’ll let the cable news panels fight that out with their “expert” commentators.)

In knowing how the whole Trump administration works, I side with Newman and what she did. With her doing the morning show blitz following the release of two audio recordings, she said she taped conversations to protect herself (and perhaps sell a few books).

You see, Trump himself has in the past tweeted that there could be recordings of his conversations with people at the White House. During the James Comey firing and subsequent fallout, Trump publicly teased that there might be audio.

On May 12, 2017, Trump tweeted, “James Comey better hope that there are no “tapes” of our conversations before he starts leaking to the press!” Was that Trump’s way of threatening Comey to be quiet? Who knows. Anything is a possibility with the “unhinged” president.

How does a tweet like that not make people look around and wonder if they are being watched at all times? Because of that, it sets the standard for an untrusting relationship where loyalty will never be fully achieved.

I previously worked in an office where the insecure president of a publishing company actually had a listening device in his living quarters. (He was having a house built and temporarily made a suite in a separate part of the building that shared a wall with my office in the editorial department.)

If that president actually used it to listen to his writing staff, I don’t know. But the fact we saw a plastic cone with a microphone in it attached to a set of headphones, all bets were off. From that point on we looked at the president with disgust and never fully trusted him. Though, he clearly didn’t trust us.

Don’t get me wrong, a publishing company staff and White House staff are two completely different things. We didn’t have national secrets or anything that would risk the security of hundreds of millions of people. At best we’d bitch about our boss or gossip about other staff.

My point is that I can relate to what Newman said she felt because you end up always on edge. You realize that you are in a Big Brother situation and are being monitored. At any minute you expect the phone to ring and be hauled into a meeting and be reprimanded for something you said.

In Newman’s case, the debate is if what she did was ethical. The real argument: Is anything ethical that the Trump administration does? Two wrongs don’t make a right, I realize that, but whose word are people likely to believe when it’s he-said-she-said? Strangely we’re seeing that Trump is believed by his supporters and they work to discredit and destroy anybody he goes to battle with. In the end, Newman was doing it to cover herself and her reputation so she is ultimately getting the last laugh (for now, anyway).

In a White House where game playing is the norm, it isn’t entirely shocking that somebody who got screwed over would tell their story for personal gain. Whether that is to redeem their character or make a few bucks telling their story, I think people will say, “Screw it, I’m looking out for me now.” That’s partially why I wrote a column earlier this summer saying for people to write a book and profit from their time at the White House. It’s a hot story right now and people are interested in hearing the dirt.

Newman is a smart woman. Despite the coy smirks she’s known to give when asked direct questions, I’m sure she’s done her research and lawyered up to find out what she could and couldn’t get away with while writing a book. Of course, Trump and co.’s reaction has been to call her a “low-life” but that’s par for the course with the president.

Newman is capitalizing on her time at the White House just as much of the staff that has departed. She was smart enough to back up her claims with evidence before she gave her middle-finger salute to her former boss. There’s no better, reliable and undisputed proof than an audio recording – but leave it up to Trump and his goons to say they were doctored or something. Standby for that!