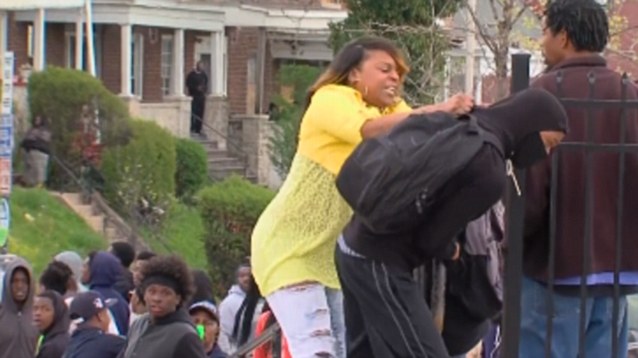 They were the slaps seen (and heard) around the world. You could call the CNN news clip, “When Mothers Attack.”

As rioters acted like animals in Baltimore — though I’m not sure many animal species act so reckless — one mom recognized her offspring on live TV and confronted the thug as he was spotted causing trouble around town. Did I mention it was on live TV? OK, just checking.

And while most viewers applauded Mom for her rampage towards her, well, rampaging son, it did spark a few questions in my mind. Is this child birther one to congratulate or one to blame?

You see, we often hear that if kids grow up in an abusive household there is a chance they could grow up to be the same way. See where I am going with this? It’s not me accusing Momzilla of being violent because clearly she demonstrated that to the world while cameras were rolling.

So it’s one thing to root for the female attacking her own misfit child but was the kid raised around aggressive discipline and violence? Again, the viral video clip seems to scream, “Yes.” And did that lead to him becoming an unruly and violent person? Well, not to sound like a broken record but, um, probably.

I am also curious to find out how many parents — or members of society in general — that are against spanking would condone the type of discipline Kung-Fu Momma unleashed on her kid during the crime spree. If a child does something wrong, people scream abuse when the youngster gets a, what’s the term, whooping? What makes this case any different? Age? Sensibility?

But think about how much outrage there is when a cop tries to use similar violent disciplinary tactics as the officer tries to get a suspect under control. As we’ve seen in recent months, cops are bad for doing that kind of thing. Overly aggressive moms are OK — by society’s standards, anyway.

As the city continues to shatter and burn, the Balti-morons run crazy through the streets destroying property and causing damage that will ultimately make the cost of goods skyrocket. Taxes might have to go up to cover the costs of all the law enforcement and cleanup the city will take care of.

I can’t wait to see the aftermath. I hope it’s like a hangover and people say, “What the hell was I thinking?”… as they wipe the pepper spray out of their eyes and wait for someone to bail them out of the slammer.

NEXT ARTICLE: READERS REACT TO THIS COLUMN