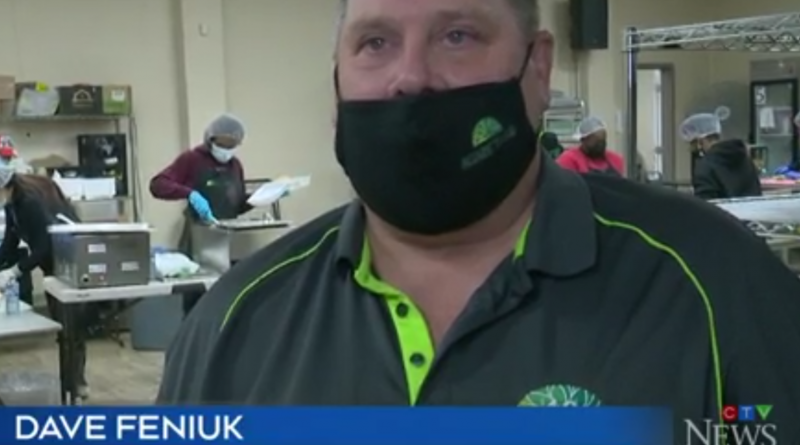 UPDATE: Oct. 22- Agape Table’s board chair, Cathe Umlah, offered no apology and sees “no benefit” in acknowledging or communicating violation of public health orders. Umlah said the organization opted to avoid “negative press” rather than take responsibility for putting the community in danger, suggesting that would be “looking for trouble.” – ORIGINAL STORY HAS BEEN UPDATED WITH ADDITIONAL INFO

We’ve only been going through this pandemic for, what — six, seven years already? OK, maybe not that long but it certainly seems like it.

So, there’s no excuse for not knowing how to wear a face mask at this point, right? You’d think.

When we hear that many regions in Canada are going through what’s called the “fourth wave” of COVID-19, it stands to reason that people would be more diligent than ever about protecting themselves and others — especially those working with the public… and serving it food.

Surely, a group of do-good adults would have the foresight to properly wear a mask while serving food to vulnerable low-income and homeless individuals for Thanksgiving. Wrong. Oh, so wrong.

Agape Table, a Winnipeg-based non-profit organization, did the press rounds to celebrate serving 1,500 Thanksgiving meals to the less fortunate in the city. Problem is, while the staff and volunteers did a victory lap, the team wasn’t following Manitoba’s provincial health orders.

Not only were volunteers photographed improperly wearing masks in what appear to be food-service areas, the organization’s general manager did a TV interview with his nose peeking over his mask.

Agape’s GM, Dave Feniuk, appeared on CTV News talking about the organization’s efforts while incorrectly wearing a face mask. For people who are diligent in following Manitoba’s public health orders, they noticed right away that Feniuk wasn’t abiding by the rules.

Thus, it was concluded, Feniuk would be in no position to instruct his volunteers to protect the unknowing public from those potentially lethal, COVID-contaminated meals. We saw proof of this in a now-deleted tweet where Agape showed off its team ignoring the province’s health orders. (The tweet was deleted after the organization was called out for its violations.)

The Government of Manitoba website outlines the current requirement for mask use in indoor public spaces. As of this posting, it read, “A person who enters or remains in an indoor public place must wear a mask in a manner that covers their mouth, nose and chin without gapping.”

We consulted the Government of Manitoba about mask wearing and asked for clarity if exposed noses are spreading the virus in communities.

“When a mask isn’t worn properly, it won’t prevent the spread of COVID-19 and could actually put the person wearing it at greater risk of infection if it has been contaminated if improperly handled.”

The government’s PR team added, “By listening to the advice of public health experts and making good decisions we can help prevent the spread of COVID-19.” (Their written statement concluded with, “A COVID-19 tip line has been established for reporting possible violations of the public health orders.”)

Indeed, there was also a handy video posted to Manitoba Government’s YouTube page well over one year ago illustrating how masks should be worn. Agape Table likely isn’t amongst the 124,000 viewers of the demonstration.

They’ve also potentially missed the statistics in recent months about how dangerous COVID-19 is to the homeless community.

While discussing the story on the radio from Los Angeles, I opened the conversation to listeners as we waited to hear from the organization. I can tell you that the audience was equally disgusted with Agape Table’s disregard for community safety in what could easily be a super-spreader event.

Rachel called in and said, “On one hand you want to thank them for feeding people and then on the other you want to slap them for not caring about their health. It’s like those restaurants you see openly violating the health orders by not enforcing the mask rules and you wonder what else is happening behind the scenes. (Agape) isn’t even hiding it. They showed what’s happening there.”

From Winnipeg, Jeanne chimed in on the images, “That’s so grimy. You’re working with food being served to vulnerable people and you put them at risk by not wearing masks properly? I’m actually grossed out right now. I’ll have to remind people about this at Christmas so they can go somewhere else.”

Nadine added, “We see people wearing masks so much that it totally stands out when someone isn’t wearing it properly. I notice it right away and it pisses me off. Those are the people you shake your head at and blame for this (pandemic) never ending.”

Mel S. texted, “Agape needs to review the anatomy of the face. Apparently they don’t know the purpose of a nose.”

Corrine wrote, “I hope somebody reported them. How does that manager still have a job?”

Darcy wrote, “There goes my donation… and my LUNCH!”

There were also people who were critical of me for calling out a non-profit organization that is attempting to do good. Those people, however, missed the point of my criticism. At no time did I discredit the overall efforts of the organization feeding the less fortunate in Winnipeg. The people involved should be applauded for their desire to help, but that does not give them a pass to endanger the community. That is the issue here and now: Public safety during the pandemic.

Seeking a response from the organization that proudly violates public health orders while soliciting donations from that public, Agape Table’s leadership was MIA. They were asked to comment about the Thanksgiving mask wearing, and more broadly about the safety measures in place while serving meals to the public during a pandemic.

GM Feniuk didn’t reply to multiple emails, though did creep my never-used LinkedIn page. Agape’s executive director, Jim Steep, was equally silent though not as sleuthy (so it appears).

Having been in communications and PR for as long as I have, I’d expect any decent organization would attempt to save face or at least offer an apology for its offending behaviour. Instead, Agape Table’s leadership looked the other way by ignoring the issue when confronted. While they could’ve been crafting some redeeming crisis-PR response, they were looking up their critics online.

Truthfully, had they done anything to acknowledge this and engage in productive dialogue, I’d have gladly cut them a $10,000 cheque from SpeakFree Media as a donation to the cause. Alas, crickets and creeping.

Feniuk was triumphant with his we’re-helping-the-community celebration, though cowardly in manning up to putting thousands of people at risk with his reckless leadership of Agape Table.

UPDATE 10/22: Over one week after I’d reached out to Agape’s leadership without response, I contacted board members to get a statement regarding the situation. I was advised the board would be discussing the matter at its meeting later in the week. The day after the meeting, I was informed that Agape’s board chair, Cathe Umlah, would call and answer my questions. We spoke on Oct. 22.

When asked if she felt this story was in the public interest, Umlah hesitated and didn’t answer the question, instead saying, “Well, what, what I think is that, uh, it is, um, of course the safety of our guests is paramount, that’s what I think.”

Attempting to refocus the attention on the policies Agape has (but clearly doesn’t follow), Umlah steered the conversation down that path.

“We do have a policy in place at Agape that everyone — all staff and volunteers — are required to wear a mask when working within the building,” said Umlah. “So, clearly those pictures that you found (publicly posted on the organization’s Twitter page) were a violation of that policy. We have spoken to staff about those concerns that we had.”

Pressed to explain the actions of Agape’s leadership by ignoring correspondence that asked specific questions about the organization’s safety policies and procedures, Umlah said, “Well, I guess the press we were unsure as to how much of that would be negative press. So, you know, we were reluctant because of the opportunity for negative press.”

Umlah was asked about the responsibility of the organization to inform and at least acknowledge or communicate the violation (hell, even apologize for its actions), Umlah said, “I don’t see any benefit to that,” referring to it as “looking for trouble.”

So, was it “just a fluke or coincidence” that half of the Thanksgiving photos, including a TV interview, showed people at Agape violating the health orders?

It should be noted that not once during the 6-minute-and-9-second phone call did Umlah, who was speaking on the record for Agape table, offer an apology or express remorse for putting the community at risk.

MORE COVID-19:
Should I go to another country just to get vaccinated?
For better or worse, Manitobans are going it alone
Would Manitoba situation be different if Roussin were respected, not seen as political puppet?
‘Now is not the time to travel’ — Screw it, I’m outta here, Justin!
I’m ashamed of Canada, I’m ashamed of being Canadian
‘We’re in this together’… and ‘we’re doing it better* than everyone else’ – So, why is MB losing?

Was it a royal waste?