Last week it was the big Adam Lambert controversy after the American Idol runner-up performed at the American Music Awards. There was outrage and shock after a gay performer kissed another male on stage.

I voiced my opinion in this column. Essentially my take was: what’s the big deal? You see people kiss all the time on TV. Get this: some of them are unattractive. Gasp! That’s a scandal unto itself, no?

Lots of people sided with my views, but I had the handful of self-described “traditionalists” that were in an uproar I even addressed the topic because it’s so vile it should never been seen or talked about ever again.

To those people I say, Crawl back under your rock and hide if you think the world is doomed because two men kissed.

I asked the protesters to comment on golf star Tiger Woods and his adultery. Here’s a married man – a father, nonetheless – busted publicly and humiliating his family after at least two cases of cheating have surfaced. Strangely the “traditionalists” weren’t as bothered by a straight married man cheating on his wife and lying to his family.

When I chatted with Joey Greco, host of TV’s Cheaters, he told me after each airing, the show gets upwards of 4,000 phone calls from people suspecting their partner is cheating. Granted, not all these couples are married, but could you imagine if they were and went against the true definition of marriage? That would be outrageous! That’s deceitful and hurtful. (For the record, Lambert’s kiss didn’t deceive or hurt anyone.)

When we think back to olden days – humour me on this, OK? – it was a man and a woman setting up house and raising a family. Oftentimes the woman didn’t work and tended to the kids while the man was the breadwinner and “took care” of the family.

Now, in today’s swinging society you’ve got people swapping partners, lots of infidelity and a whole bunch of other stuff going on behind closed doors. Is anything really “traditional” anymore? Are we so progressive now that people can think for themselves and do what they want?

Don’t get me wrong, I’m not spitting on the idea of marriage, I’m just saying people need to be open-minded to what works for others as long as it’s honest and not hurting other people.

In the grand scheme of things, what really is traditional anymore and why do we feel the need to hang onto the past? It’s a new world – embrace change. 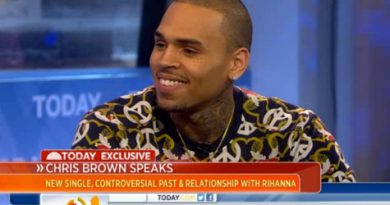