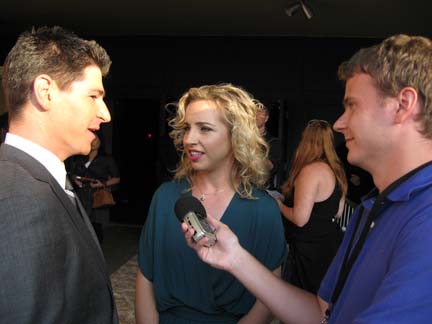 While most Canadians enjoyed the August long weekend, I took part in a marathon trip to Los Angeles. (I was there and back with no sleep over a 24-hour period.)

The Comedy Central Roast of Roseanne was taped the Saturday night and like a determined entertainment reporter I hopped a plane early Saturday morning to be at the show.

I went straight from LAX to the venue in Hollywood to wait in line at media check-in with a couple dozen reporters — some from as far away as Germany and Poland.

Instead of it being an afternoon of red carpet arrivals, the event had brown shag carpet (a la Roseanne’s sitcom from many years ago) and it was sponsored by Taco Bell and Klondike.

Thinking there would be an ounce of dignity sneaked in here and there, the roasters — including Jane Lynch, Carrie Fisher, Gilbert Gottfried, Seth Green and Tom Arnold — kept the humour in the toilet most of the night. At times I squirmed a little and I consider myself to have a raunchy sense of humour.

There were a few cringe-worthy jokes including a shot at a dead Whitney Houston and the movie theatre massacre in Colorado, but overall the show was hilarious.

I went into it thinking what you will see on TV is exactly how it played out. I tried to figure out what would make it on the air and what wouldn’t. And if they do air the stuff I thought would be too risque for TV, they are more ballsy than I thought.

My reports from the Comedy Central Roast of Roseanne are online at live.jbonair.com.