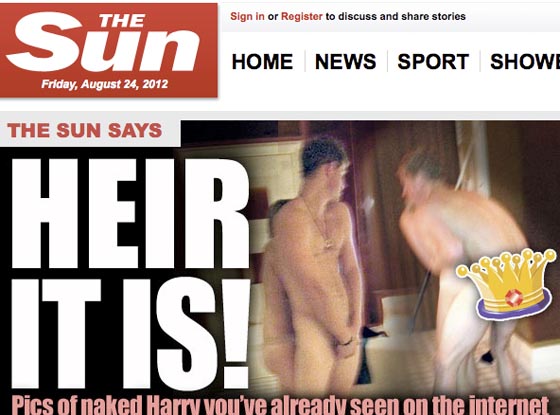 Uptight Royal watchers, the city of Las Vegas and global prudes are in an uproar about the naked party photos of Prince Harry and his crown jewels.

In case you missed it: tabloid websites posted the blurry cameraphone images of Harry having a wild time without his clothes. Apparently he was with a bunch of females in a hotel suite where things got rowdy. Someone snapped some pics, sent them to the tabloids and everybody has been gawking at Harry’s butt ever since.

The fallout started instantly. Royal guards were blamed for what could have been a security threat. Many wondered how Harry was allowed to be so reckless in Sin City. Clearly these people haven’t been keeping track of Harry’s antics over the years. He’s not prim and proper and has never pretended to be.

But isn’t that what we love about Harry? He shows us that the Royal Family isn’t just a bunch of stiffs (maybe that’s not the right term to use when talking about a naked pic scandal, but you know what I mean).

When we envision the Royal Family it’s always the great posture, the nice dress, the formalities. Isn’t it refreshing to have a black sheep in the younger generation of the family?

All the while the city of Las Vegas ripped the tabloids for posting private photos from a hotel suite saying the slogan “what happens in Vegas, stays in Vegas” should apply no matter who is visiting. If you ask me, it seemed like Vegas was just trying to get in on the attention when it really only made the city look like a bunch of crybabies.

All in all, the Royal Family has been the subject of lying scandals and cheating scandals so is having a few drinks at a hotel and taking off your clothes while goofing around really that serious in the grand scheme of things? Really? Come on.

Remember when Americans made Canadians feel like lesser people?