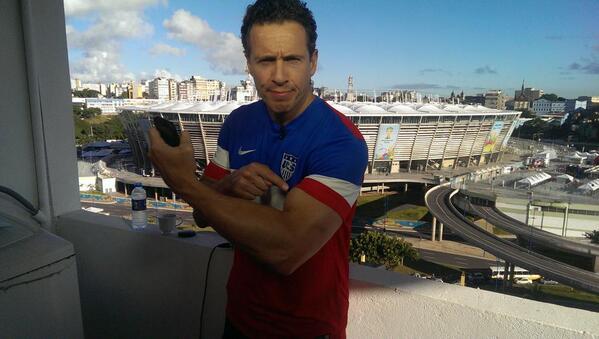 CNN anchor Chris Cuomo took his catchphrase “let’s get after it” to a whole new level when he acted like a goon trying to fight a guy last weekend. Then again, maybe it was more “let’s go at it.”

The now-viral video shows Cuomo, who constantly complains society is too violent, aggressively confronting a guy who called him Fredo — a reference to The Godfather — and Cuomo didn’t take kindly to the name. Cuomo’s argument, outlined through the use of expletives and the threat of physical violence, is that calling an Italian that name is akin to calling someone the N-word.

And with that, it was on.

Several times during the nearly two-minute exchange, Cuomo threatens the guy to a fight, saying, “Punk-ass bitches on the right call me Fredo. He was a weak brother. And they use it as an Italian aspersion. Are any of you Italian? Are you Italian? It’s a fucking insult to your people. It’s like the N-word to us.”

Cuomo unleashed, “If you want to play, we’ll fucking play. You’re gonna have a fucking problem. It’s a little different on TV. Don’t fucking insult me like that.”

Let’s kick things up a notch.

Cuomo continued, “I’ll fucking ruin your shit. I’ll fucking throw you down the stairs like a fucking punk.”

The trash talking continued before someone ultimately steps in to separate the men.

Sooooo… what’s wrong with just walking away if someone says something that you don’t like? Judging by the video, it’s Cuomo who is seemingly more fired up than the heckler. Am I defending the heckler? Not at all. What I’m suggesting is Cuomo is the one seen losing his cool and threatening to attack the guy.

For the many hours Cuomo has bitched that the U.S. is in a tailspin and society is headed in the wrong direction, was inciting violence the appropriate thing for a national TV anchor to do?

For its part, CNN stood by the threats of violence. A rep for the network tweeted, “Chris Cuomo defended himself when he was verbally attacked with the use of an ethnic slur in an orchestrated setup. We completely support him.”

If Cuomo was getting roughed up and physically attacked, sure, get violent and defend himself. But someone just getting in his face when he can easily walk away — well, it seems a little goon-ish to me. It came across as, “I’m a tough guy and these arms everyone loves seeing soaking wet in a T-shirt during a hurricane can do some damage to you.”

CNN’s statement supporting the threat of violence is odd considering the network devotes hours upon hours of coverage with hosts and panels lamenting that something needs to be done to bring civility back.

I wonder if Cuomo can be taken seriously now when he’s whining about people being violent when he’s the one who took the confrontation to that level.