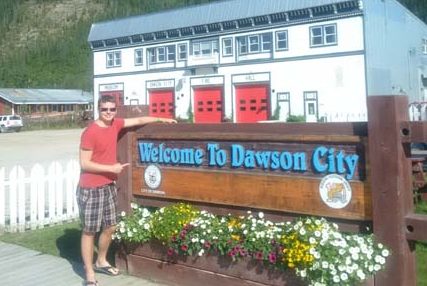 As you read this I am far away in Canada’s North on assignment covering Dawson City Music Festival. Yes, “the” Dawson – where you can meet the guy who lives in a cave, have a Sourtoe Cocktail that consists of a severed human toe in a shot glass and participate in a cancan show… all in the same night.

It’s true. Yes, it’s true. When I was in Yukon in the summer of 2013, we checked out the fun of Whitehorse and also rural Dawson (yukon.jbonair.com).

As we planned the travel/tourism broadcasts for this summer and winter, Yukon came up again because one of the tourism folks I met said to come back and check out the famous music festival in Dawson. We connected a couple months ago and the rest is history.

Oftentimes that feeling comes from talking with Hollywood celebs that are impersonal and fake so there isn’t an emotional connection for us. Then again, in six minutes I’m not sure how much ground you can really cover.

When I looked through the artist lineup for the festival I’ll admit I had not heard of anybody on the roster. Nobody. Then again, I don’t follow indie artists or, quite frankly, tune into music at all just because I feel most of it lacks originality and quality.

So I got a rude awakening while preparing for the four guests we welcomed as a lead-up. I listened to the music, I watched the videos, I read the bios. And I have to say: we’ve got some really cool, talented artists in this country.

At a festival like this, the appeal is being able to interact with the performers. After they finish their set they are mingle in the crowds and check out the other shows. They sit with little kids and teach them how to strum a guitar. They offer to buy you a beer to thank you for your support.

I want all of these up-and-comers to stay humble and true to their fan base and not get an ego that they are somehow one of the bigger people stepping on the little people on their way to the top.

Highlights from the festival are at dawson.jbonair.com.