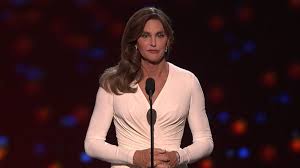 The fanfare continued for Caitlyn Jenner this week. The ESPY Awards – recognizing the best in American sports – were handed out.

Admittedly the ESPYs aren’t typically a huge television draw. If anything, the big name they were touting this year was Jenner. Why? Probably because the trendy thing these days is to be transgender. It’s the new “in” thing – it’s like the new gluten free.

Jenner received a courage award for the, I guess, courageous transition of going from male to female.

To be politically correct and not face some sort of backlash which is so common these days, allow me to state the standard disclaimer: I think Jenner going public with the struggles and journey to transition are admirable and hopefully will encourage tolerance and acceptance to the transgender community. There. I said it. Can I get to my point?

The standing ovation at the ESPYs was a little much as Jenner took the stage to accept a courage award. I tweeted that I want to cut off my balls during radio ratings time and see what that gets me. Will I even get applause, let alone a standing O?

I think people facing a cancer battle are courageous. Why isn’t there an award for survivors like that? Living your life as the person you believe you have always been doesn’t sound courageous to me. It would be like saying, “I’m really a blond but I’ve lived a lie all these years as a brunette.” Applause, applause, applause for your courage. Brave soul.

Watching the hotly anticipated spectacle that has become Jenner’s life makes me wonder why previous transgender people – notably Chaz Bono – didn’t have the same ceremonial applause, dedications, tributes, tears and standing ovations from thousands of people. What makes Jenner’s story any different? Aside from being a famed athlete decades ago, of course.

So I understand the world needs more tolerance. I agree that people should be more open minded. But if Jenner truly wants to be an inspiration and a voice for an underrepresented segment of the population, I hope that $5 million paycheque for the new reality show on E! is being donated to charity. I hope that cash is going to do some good and not just turn into more dirty Kardashian money for Jenner: family-man-turned-hypocrite.

Jenner previously said it’s not about publicity, so how can you explain playing hard to get with E! and trying to stir up a bidding war between TV networks? Sounds a little disingenuous when we start to throw in all these behind-the-scenes facts, doesn’t it?

Being Latin isn’t working to his advantage anymore